A young Bruce Willis look-a-like is gunning to play the part of the young John McClane in Disney’s Die Hard franchise reboot.

According to The Clarion Ledger, New Orleans-based actor Jeremy Sande (“Deepwater Horizon”) is pounding the pavement in the hopes that Walt Disney Studios will consider him for the role of a lifetime in the next “Die Hard” franchise.

Says the actor, “About a two years ago when I heard the chatter of a new Die Hard, I felt this was my opportunity.’ When it (Die Hard) came out it blew away the action genre. John McClane was just a normal guy who wound up in a situation where he had to perform outstanding acts to survive which is what the human genome is designed to do.”

“So I set out to produce a short film, basically as my informal audition tape. With the help of some incredibly talented filmmaking friends, we made “Roy” within a week.” Anyone that is a

Die Hard fan will understand the Roy reference from the original 1988 film, directed by John McTiernan.

Sande’s film “Roy” can be found on YouTube at:

“My degree of separation isn’t very far at all,” he said. “I blasted a couple of representatives and publicists. I’m picking up the bread crumbs and seeing where they lead me. It sounds crazy but if it works then I’m a genius.”

Sande has worked alongside some big names in Hollywood. Mark Wahlberg, Liam Hemsworth, and Bill Skarsgard, to name a few. He seems to think that he has learned what it will take to walk in those bloody footprints of Bruce Willis.

“Since I was a little kid, I knew I wanted to be an entertainer. I watched every movie I could get my hands on. I feel like this is my shot… so I’m taking it.” Sande says. A more in depth telling of his story can be found at:

Entertainment Weekly’s first issue of 2016 featured a write up on “Deepwater Horizon”. I had an incredible experience working on this production. Can not wait to see the final work. Estimated release date is Sept. 30, 2016 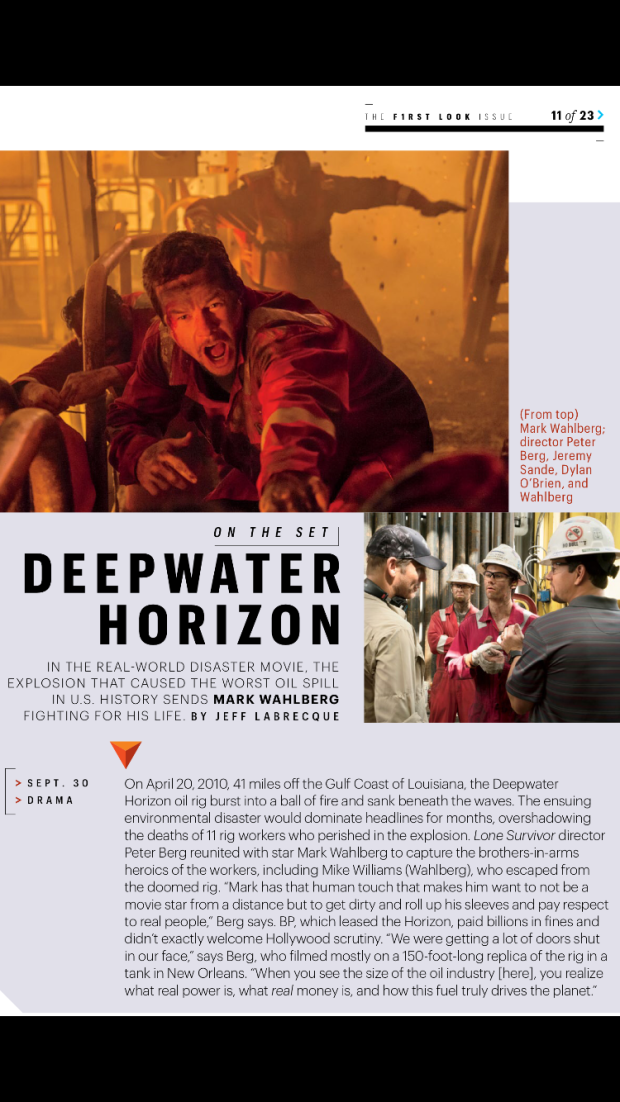 Hello, and welcome to my official website!  You may “Follow” this blog to receive email updates when new posts are added.  I can’t wait to tell you more about my upcoming film and television work.

Thank you for visiting!

Check out the Pages listed above to view photos, video, articles, and more!